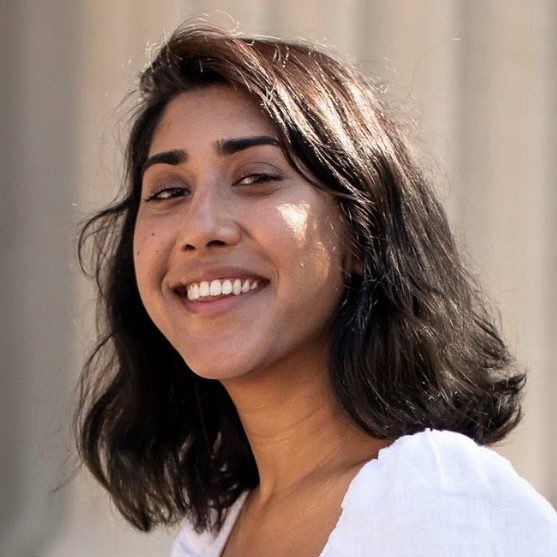 Tanusha has been acing standardized tests since 2011, when she was ranked 6th in the country of India on a national exam. She remembers taking the test sleepy from jet-lag, having flown in from Hanoi the night before. As a Bethesda-born third culture kid, parented by a pair of World Bank economists, Tanusha grew up in Ethiopia, Vietnam, and India. She returned to Bethesda for high school and graduated from Whitman ranked first in her class, with a perfect GPA and perfect PSAT score (the first ever administration of the 1520 test).

Tanusha is a Columbia University alum, and graduated from the College in 2021 with degrees in economics, mathematics, and statistics—and a love for translated literature. While earning these degrees, she worked at Facebook (now Meta) as a Data Scientist and in JP Morgan’s Corporate & Investment Banking division as a Rates Trader. Her more adventurous work experience includes an eight-month sojourn through Morocco, Thailand, and Greece, and a semester spent teaching math on a 400-acre working farm in rural Vermont. Tanusha loves Pixar movies, buying boots, and making lists. Her favorite books are Han Kang’s The Vegetarian, Dostoevsky’s Crime & Punishment, and Zora Neale Hurston’s Their Eyes were Watching God.

I collaborate with students to find the right approaches and strategies for them, as I see us as collaborators with the same mission—to strengthen their test-taking skills. The student is the expert on their own learning style and process, while I am the expert on the test. Test-taking is a skill rather than an innate ability and thus can be acquired, honed, and perfected.

Tanusha is fantastic. We’re very happy with her. She follows up and is flexible. Excellent overall. ~Mclean High School parent